Six thrillers in which the natural world is a character

Elisabeth de Mariaffi is the critically acclaimed author of four books: the Scotiabank Giller Prize-nominated short story collection How to Get Along with Women

(2012), the literary thriller The Devil You Know (2015), and the 1950s-era Hitchcock-style thriller, Hysteria (2018), both of which were named Globe and Mail Best Books of the year, and shortlisted for the Thomas Raddall Atlantic Fiction Prize.

Her newest novel, The Retreat, is about a dancer who must separate truth from lies in order to survive a deadly storm at a remote mountain arts retreat.

At CrimeReads de Mariaffi tagged six favorite "books that use monstrous nature not only as a setting—but as a true character in the story." One title on the list: 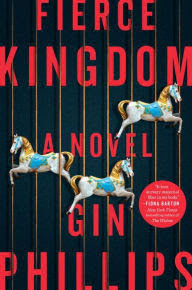 Wild animals are again a theme in this suspense novel about Joan, a mother on what seems like a regular afternoon trip to the zoo with her young son—until a shooter comes through the gate just before closing time. Joan has to use her knowledge of the zoo’s pathways and exhibits to survive a deadly game of hide-and-seek—keeping herself and her four-year old safe from a gunman who is hunting humans.