Featured at the Page 99 Test: Hollywood Shutdown: Production, Distribution, and Exhibition in the Time of COVID by Kate Fortmueller. 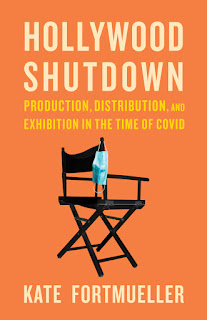 By March 2020, the spread of COVID-19 had reached pandemic proportions, forcing widespread shutdowns across industries, including Hollywood. Studios, networks, production companies, and the thousands of workers who make film and television possible were forced to adjust their time-honored business and labor practices. In this book, Kate Fortmueller asks what happened when the coronavirus closed Hollywood.

Hollywood Shutdown examines how the COVID-19 pandemic affected film and television production, influenced trends in distribution, reshaped theatrical exhibition, and altered labor practices. From January movie theater closures in China to the bumpy September release of Mulan on the Disney+ streaming platform, Fortmueller probes various choices made by studios, networks, unions and guilds, distributors, and exhibitors during the evolving crisis. In seeking to explain what happened in the first nine months of 2020, this book also considers how the pandemic will transform Hollywood practices in the twenty-first century.

Learn more about Hollywood Shutdown at the University of Texas Press website.